Jeff Bezos full name is Jeffrey Preston Bezos born January 12, 1964 is an American internet entrepreneur, industrialist, media proprietor, and investor. He is best known as the founder, CEO, and president of the multi-national technology company Amazon. 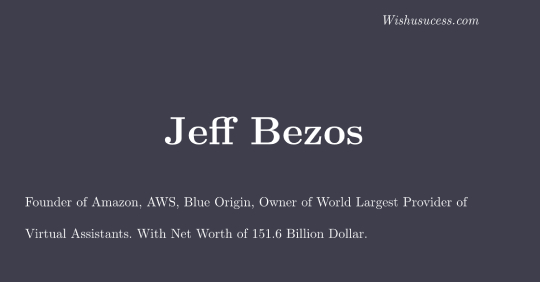 The first centi-billionaire on the Forbes wealth index, Bezos has been the world's richest person since 2017 and was named the "richest man in modern history" after his net worth increased to $150 billion in July 2018.

In September 2018, Forbes described him as "far richer than anyone else on the planet" as he added $1.8 billion to his net worth when Amazon became the second company in history to reach a market cap of $1 trillion.

Early career: After Bezos graduated from Princeton University in 1986, he was offered jobs at Intel, Bell Labs, and Andersen Consulting, among others. He first worked at Fitel, a fintech telecommunications start-up, where he was tasked with building a network for international trade. Bezos was promoted to head of development and director of customer service thereafter. He transitioned into the banking industry when he became a product manager at Bankers Trust. He worked there from 1988 to 1990. He then joined D. E. Shaw & Co, a newly-founded hedge fund with a strong emphasis on mathematical modelling in 1990 and worked there until 1994. Bezos became D. E. Shaw's fourth senior vice-president at the age of 30.

Amazon: In late 1993, Bezos decided to establish an online bookstore. He left his job at D. E. Shaw and founded Amazon in his garage on July 5, 1994, after writing its business plan on a cross-country drive from New York City to Seattle. Bezos initially named his new company Cadabra but later changed the name to Amazon after the Amazon River in South America.

Blue Origin: In September 2000, Bezos founded Blue Origin, a human spaceflight startup company. Bezos has long expressed an interest in space travel and the development of human life in the solar system. He was the valedictorian when he graduated from high school in 1982. His speech was followed up with a Miami Herald interview in which he expressed an interest to build and develop hotels, amusement parks, and colonies for human beings who were in orbit. The 18-year-old Bezos stated that he wanted to preserve Earth from overuse through resource depletion.