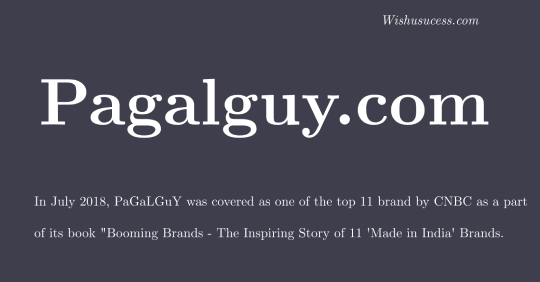 PaGaLGuY is India’s largest education network. We are the pioneers of massive online education communities in the MBA education space. We’ve expanded to Banking, SSC CGL, Engineering, UPSC and are looking to add newer verticals every month. We are constantly improving our product line-up to help students make better choices for their education needs.

On December 12, 2009, community members announced a protest against the government for a scam involving medical exams held in India. The students called the test unfair, inconsistent and chaotic, and alleged that the questions were leaked even as the examination was underway.

In 2010, PaGaLGuY created and launched an MBA affiliate program, allowing students to register on the website and apply to multiple colleges thorough a single platform.

In July 2012, the website was relaunched incorporating social networking features to its platform, changing from a forum website to a social network.

In July 2018, PaGaLGuY was covered as one of the top 11 brand by CNBC as a part of its book "Booming Brands - The Inspiring Story of 11 'Made in India' Brands

Revenue comes almost entirely from advertising. They get perennial interest from business schools to advertise for both branding as well as to generate applications during the admission season. This includes b-schools in both India and abroad.

And ad revenue more than keeps them going.