A 2018 survey for Research Intelligence by Brand Keys found that the BBC was the most trusted TV news brand and most popular news channels among American viewers, beating out Fox News and PBS. 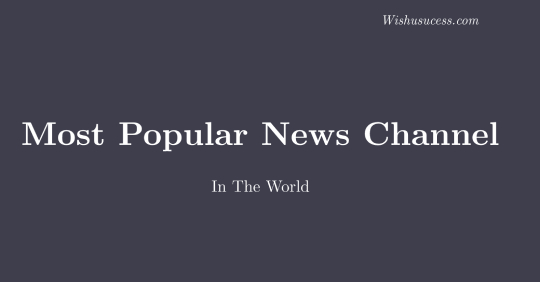 Fox News Channel (FNC) was founded in 1996 under the ownership of News Corporation and one of the Most Popular News Channels (founded by Australian-born media mogul Rupert Murdoch), the fifth largest media company in the United States behind Sony, the original Viacom (now ViacomCBS), Time Warner (now WarnerMedia), The Walt Disney Company, Seagram and MGM. The network is headed by chief executive officer Rupert Murdoch. The network began broadcasting its programming in high definition in May 2008.

The Cable News Network (CNN) is an American basic cable and satellite television channel that is owned by the Turner Broadcasting System division of Time Warner.

Sky News is a 24-hour international multimedia news operation based in Britain. Originally a 24-hour television news channel in the UK, Sky News now provides rolling news on television, online, and on a range of mobile devices.

Al Jazeera literally “The Peninsula”, referring to the Arabian Peninsula), also known as JSC (Jazeera Satellite Channel), is a Doha-based state-funded broadcaster owned by the Al Jazeera Media Network, which is partly funded by the House of Thani, the ruling family of Qatar.

Euronews is a multilingual news media service, headquartered in Lyon, France. Created in 1993, it aims to cover world news from a pan-European perspective. Naguib Sawiris, an Egyptian businessman, is Chairman of its Supervisory board.

Al Arabiya meaning “The Arabic One” or “The Arab One” is a Saudi-owned pan-Arab television news channel broadcast in Modern Standard Arabic.

NDTV India (Hindi: NDTV इंडिया) is a Hindi news channel in India that is owned by New Delhi Television Limited. Noted journalist Vinod Dua has been associated with this channel.