The Viral Fever (TVF) is an online YouTube channel started by TVF Media Labs in 2010, and currently owned and operated by Contagious Online Media Network Private Limited. According to the founder Arunabh Kumar, the thought behind starting TVF was to reach out to the younger generation who seldom watch television entertainment. 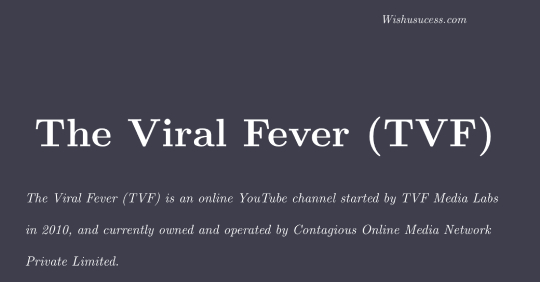 The Viral Fever was one of the early arrivals on the Indian digital entertainment segment with videos covering a range of topics on Indian politics, movies, lifestyle, and emerging social concepts. The Viral Fever was the pioneer of web-series in India with cult hits like Permanent Roommates and Pitchers.

As of june 2020, TVF has over 71 lakh (7.17 million) subscribers on YouTube. The company runs the app and website, TVFPlay to host their videos. TVF conceptualized the idea of promoting movies through the creation and distribution of original digital content. The Ishq Wala song series is one such venture.

The first web series Permanent Roommates debuted in 2014. It was the second most-viewed long-form web series in the world by June 2015. A second original series titled TVF Pitchers was released in June 2015. It portrays engineers at different companies who quit their jobs to create a startup company. Owing to its growing popularity, with both TVF Pitchers and Permanent Roommates being watched by millions around the globe, the company received a funding of $10 million from Tiger Global as was reported on 17 February 2016.

Early Days: After graduating from IIT Kharagpur, Kumar quit his job as a consultant for US Air Force to try his hand at production jobs, assisting Farah Khan on Om Shanti Om. After a few production jobs, Kumar began to write and produce his own short films and videos.

Arunabh Kumar, along with long-time friends and IIT alumni, Amit Golani, and Biswapati Sarkar began pitching shows aimed at the youth to MTV. Faced with rejection, The Viral Fever was founded when the group came together and released a video titled Rowdies on YouTube starring Deepak Kumar Mishra and Naveen Kasturia. The runaway success of the video prompted Arunabh to create the YouTube focused video company, The Viral Fever, in 2012.

Growth on Youtube (2012–2014): The Viral Fever released the first Barely Speaking with Arnub video with an interview of Shah Rukh Khan, and an appearance by then and current Delhi Chief Minister, Arvind Kejriwal.

Biswapati Sarkar's parody of Indian news anchor Arnab Goswami was widely appreciated. TVF's content was dominated by parodies during these years with videos like Gaana Waala Song, Gangs of Social Media and Munna Jazbaati contributing to the growing popularity of The Viral Fever. The channel was recognized as one of the first success stories of original digital content in India.

After a few years of creating "viral videos", The Viral Fever released India's first web-series, Permanent Roommates, in 2015. Featuring then-unknown actor Sumeet Vyas and Nidhi Singh, Permanent Roommates has been watched over 5 crore (50 million) times. Pitchers was lauded as one of the best shows in recent memory in Indian entertainment for capturing the zeitgeist of the Indian startup scene. In 2016, The Viral Fever released the smash hit Tripling, and the widely applauded Humorously Yours. Other TVF network channels like Girliyapa, The Screen Patti and The Timeliners have also successfully debuted web-series.

TVF debuted their platform, releasing the final two episodes of Pitchers on TVFPlay. The platform saw 10 lakh (1 million) hits in the first two days and crashed for 3 hours. In early 2016, venture capital firm Tiger Global Management invested $10 million into The Viral Fever, acquiring a 20% stake in the company.

The Viral Fever has since launched other YouTube channels for original content: Girliyapa, a female-run channel, The Screen Patti, and The Timeliners, headquartered in New Delhi. TVF currently has offices in Mumbai, New Delhi, and Palo Alto.

Members of The Viral Fever (TVF)

As of 2017, the TVF Group has a total team of 240 in Mumbai and Delhi. Some of the notable members are listed below.

Controversy of The Viral Fever (TVF)

In March 2017, Arunabh Kumar found himself in the middle of a sexual harassment claim that was posted anonymously via Medium. TVF released a press release via Medium refuting the claims. Several women have come out with similar stories of harassment. An FIR has been filed against Kumar in this case.

A second FIR was then lodged against sexual harassment-accused CEO and founder of The Viral Fever Arunabh Kumar. Mumbai's Versova Police registered the FIR after another woman filed a complaint against Kumar over an incident she said took place in 2014.

Properties of TVF (All Web Series of TVF)

The Making Of...entertainment products in India, ranging from a blockbuster movie to a decade long TV soap. The first season of The Making Of... comprised five episodes, with a standalone episode released for Season 2 in 2016.