United Progressive Alliance (UPA) is a coalition of centre-left political parties in India formed after the 2004 general election.

The largest member party of the UPA is the INC, whose President Sonia Gandhi is chairperson of the UPA. 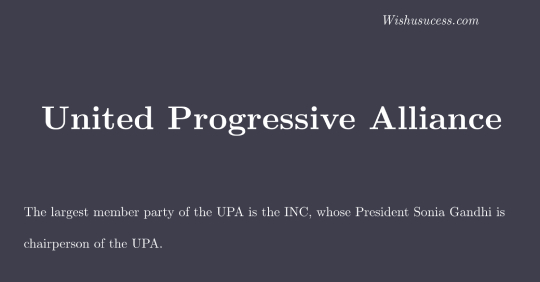 It formed a government with support from some other left-aligned parties in 2004, after no single party could get the majority on its own.

The UPA was formed soon after the 2004 general elections when it had become clear that no party had won an absolute majority.

The Left Front with 59 MPs (excluding the speaker of the Lok Sabha), the Samajwadi Party with 39 MPs and the Bahujan Samaj Party with 19 MPs were other significant blocks that opted to support UPA at various phases of its rule.

The UPA did not enjoy a simple majority on its own in the parliament, rather it has relied on the external support to ensure that it enjoys the confidence of the Indian parliament similar to the formula adopted by the previous minority governments of the United Front, the NDA, the Congress government of P. V. Narasimha Rao, and earlier governments of V. P. Singh and Chandra Shekhar.

An informal alliance had existed prior to the elections as several of the current constituent parties had developed seat-sharing agreements in many states. However, it was only after the election that the results of negotiations between parties were announced.

The UPA government's policies were initially guided by a common minimum programme that the alliance hammered out with fruitful consultations with Jyoti Basu and Harkishan Singh Surjeet of the 59-member Left Front.

Hence, government policies were generally perceived as centre-left, reflecting the centrist policies of the INC.

During the tenure of Jharkhand Chief Minister Madhu Koda, the constituents of the UPA were, by mutual consent, supporting his government.

On 22 July 2008, the UPA narrowly survived a vote of confidence in the parliament brought on by the Left Front withdrawing their support in protest at the India–United States Civil Nuclear Agreement.

The Congress party and its leaders along with then SP leader Amar Singh were accused for cash for vote scam (see: Cash-for-votes scandal) in which they were accused for buying votes in Lok Sabha to save the government.